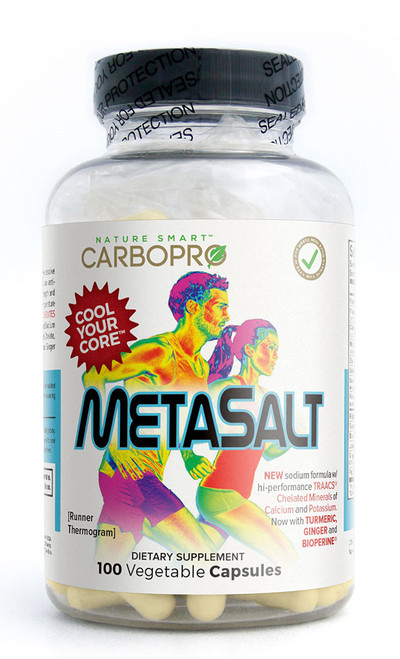 NEW sodium formula with high-performance TRAACS® Chelated Minerals of Calcium and Potassium; and Magnesium from Creatine Magnapower®, to generate and regenerate ATP. Now with TURMERIC Extract (Curcuminoids 95%), with GINGER and BIOPERINE® to help provide enhanced bioavailability and superior absorption. Vitamin D3 to help every performance variable. It has three forms of Sodium as Sodium Chloride, TriSodium Phosphate, and Sodium R-Lipoate, Selenium and Zinc work together with the body's endogenous anti-oxidants, during exercise activity, to convert free radicals into harmless residues, mainly water and carbon dioxide and Vitamin D3.

MetaSalt  is the only sodium supplement which provides three forms of sodium which work together to maintain the optimal metabolism of sodium to prevent dehydration (a decrease in total body water without an equal reduction in total body sodium) and prevent volume depletion (a loss of body water and sodium resulting in decreased extracellular fluid volume).

MetaSalt is actually a high-performance ELECTROLYTE complex which also has Potassium, Calcium and Magnesium as chelated minerals; with Magnesium as Creatine Magnapower. It is also a potent anti-oxidant complex with Selenium and Zinc.

During extended activity take TWO capsules per hour with 8 to 10 oz of water. In extreme conditions take two to three capsules every 30 minutes with sufficient water.

You may break open the required quantity of capsules and pre-mix in water + CARBO-PRO or any sports drink.

Each serving size (TWO capsules) of MetaSalt provide 330 mg of sodium (from 750 mg of Salt - Sodium Chloride, and 80 mg of TriSodium Phosphate). 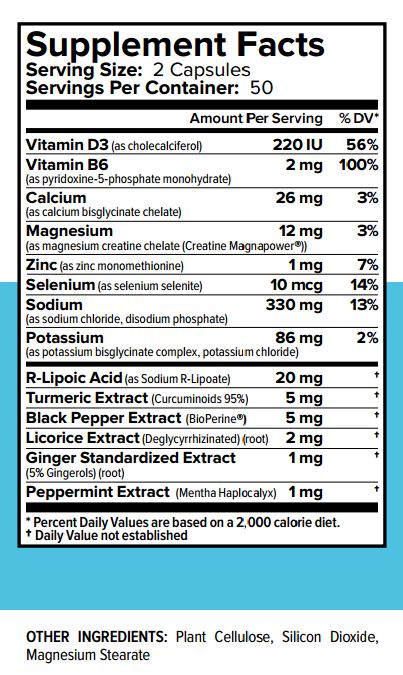