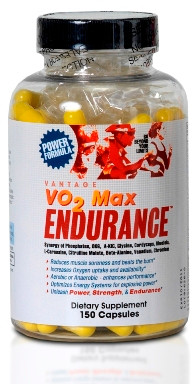 For Endurance and  Power:to beat the BURN & PREVENT DOMS

BEAT THE BURN - buffer lactic acid, cleanse ammonia burden Suggested usage As a dietary supplement - take FOUR to FIVE capsules 30 minutes to 45 minutes before exercise activity. For PHOSPHATE LOADING, for FOUR to FIVE days leading up to the race, take FOUR capsules of VO2 Max after lunch each day - OR - immediately before going to bed each night.

VANTAGE VO2 Max (150 capsules) is a cutting-edge product, and is a unique, clinically profiled blend of safe and effective nutrients that BEAT THE BURN increase energy and endurance during periods of intense and extended activity, during training and competition.

VO2 Max is backed by a wealth of research to support its potent and immediate effects on performance. Its a nutrient dense ergogenic aid that brings immediate results! Ideal for athletes and fitness enthusiasts. Its a must to prevent muscle soreness and cramping. It reduces lactic acid build-up,cleanses ammonia burden, thereby enabling intense exercise activity.

DURING ACTIVITY: (long training rides/runs or races)
Take TWO to THREE capsules of VO2 Max Endurance per hour of activity

Use VO2 Max Endurance to:

research report
Muscles fatigue and tie up when repeated resistance is applied. The burn finally makes it impossible to complete another rep. The biggest cause is lactic acid. Lactic acid, ammonia and other metabolic wastes build up in the muscles with repeated movements. The more anaerobic the exercise, the faster the build-up. Maximum strength output can tie up the muscles in just one rep. Rest becomes a must until lactic acid and other metabolic wastes are cleared or chemically reconverted before the exercise can continue. Recent studies show that a specific formulation of phosphates, amino acids, vitamins, and minerals, work in synergy to buffer lactic acid build-up and reduce the accumulation of ammonia. VO2 Max also contains CORDYCEPS CS-4, and RHODIOLA Root Extract of the highest quality.

Cordyceps has been found to have effects on hepatic function, renal function, endocrine system, and the cardiovascular system. (11) Its effects on the cardiovascular system, stamina and endurance have been proven. Several reports and studies have been done to provide evidence for the effects of Cordyceps on human performance. A study which was published in the Medicine & Science in Sports & Exercise Journal, 2001, concluded that Cordyceps CS-4 supports normal fat mobilization and beta-oxidation, thereby preserving glycogen usage during prolonged exercise[12].

The phosphates in VO2 Max are in the form of sodium and magnesium, and Potassium is in the form of Bicarbonate, thereby providing phosphates plus a proper balance of essential macrominerals/electrolytes to maintain peak performance.

A double blind, placebo-controlled independent study was conducted to find if oral administration of CS-4 resulted in enhanced endurance and resistance to fatigue. After three weeks of administration, the groups given CS-4 were able to swim significantly longer than the control groups. The results of the study were dose dependent with results of one group showing a 30% increase in endurance and the second group showing a 73% increase in endurance. The study concluded that the cardiotonic action, inhibition of tracheal constrictions and relaxation of vascular contractions (which CS-4 evokes) elevates the ability and endurance of exercise[13]. Another double blind, placebo-controlled study to test the effects on physical performance was performed in 1998 led by S. Morrissey of Beijing Medical University Sports Research Institute. They took 30 males and place them in two groups. Each group was given a different concoction, one a placebo. Blood samples measuring lactate levels were taken before, during max and after exercise. They found that the group given the formula containing cordyceps experienced improved lactate clearance. Researchers concluded that lactate clearance improved due to improved lactate energy metabolism within the cell. The author concluded that using this herbal formulation would enhance lactate clearance and allow athletes greater anaerobic performance [14].

Just like CordycepsCS-4, Rhodiola rosea is also an adaptogen, which means it works primarily as an endurance booster. It produces a normalizing action on the body, increasing resistance to adverse influences. The adaptogenic effects of Rhodiola have been demonstrated in numerous studies, resulting in increased resistance to the effects of physical and mental stress. Legend has it that the Vikings routinely consumed rhodiola rosea to boost their strength while on long campaigns. Eastern Europeans and Scandinavians also benefited from the fatigue-fighting properties of rhodiola rosea. Most research on rhodiola rosea has been done by Russian and Scandinavian scientists, although American and Canadian nutritionists have begun their own studies in recent years. One leading theory is that rhodiola rosea directly affects the level of chemicals in the brain responsible for endurance and mood. The active ingredient in Rhodiola is a substance called rosavin, which seems to dramatically improve the physical endurance levels in studies. VO2 Max contains 3% standardized rosavin and is highly effective in promoting endurance. When taken as suggested rhodiola rosea can dramatically impact the body's overall energy level.

ammonia scavengers (OKG & KIC)
A second inhibitor of exercise, happening simultaneously with the accumulation of acidity, is accumulation of ammonia. All anaerobic and endurance exercises produce a lot of ammonia. Ammonia is toxic to all cells, reduces the formation of glycogen, and inhibits the energy cycle. The higher your blood ammonia the poorer your performance. So the second ingredient a successful ergogenic supplement has to do is to reduce ammonia accumulation. Combination of KIC, OKG and other co-factors in the VANTAGE, provide the most potent anti-catabolic mix of amino acids yet known to science.

L-Ornithine Alpha-ketoglutarate (OKG), which has the same carbon skeleton as glutamine, not only provides a substrate for glutamine, but contains virtually no ammonia. Far from adding to the ammonia burden, OKG acts in the body as an ammonia scavenger (Michel H, et al). OKG is crucial to reducing the ammonia burden. OKG also acts as a strong releaser of growth hormone, provides a ready source of glutamine, an anti-catabolic, and a support for the immune system.